My younger brother, Paul Timothy Bergeson, never made it to his senior year in high school. He would have been 59 last month, but left us unexpectedly one hot (really hot!) July day in 1976 at the tender age of 17.

Paul was a three-season athlete and was working out with friends at Mariner High School in White Bear Lake, Minnesota in preparation for the upcoming football season. For some reason he told his buds to go on ahead while he lingered on the field. When he didn’t show up at the locker room after too much time had passed, they went back to the field and found him dead on the grass.

No one knew that he had a rare and (at the time) little-understood heart disease called asymmetric septal hypertrophy (ASH). The ventricular part of the heart muscle is enlarged which reduces the size of the ventricular cavity and can obstruct the flow of blood leaving the heart. Today the disease can be mitigated in various ways, but cardiac arrest can still occur with no warning.

Paul’s post-mortem diagnosis got the attention of the medical community. First the entire family traveled to Mayo Clinic for examinations to find out if anyone else tested positive for the disease. All results were negative. However, because our mother had a known (although likely unrelated) heart condition, she was flown to the National Institutes of Health in Washington, DC for additional testing. Fortunately nothing ominous was found and no connection to ASH could be identified.

Recently, while reflecting on that gut-wrenching period in our lives, I was reacquainted with a newspaper story about Paul and the friends who were with him that day he died. Their words reminded me of parts of his personality that I had forgotten or may never have experienced in the same way that they did. I appreciated that reminder. 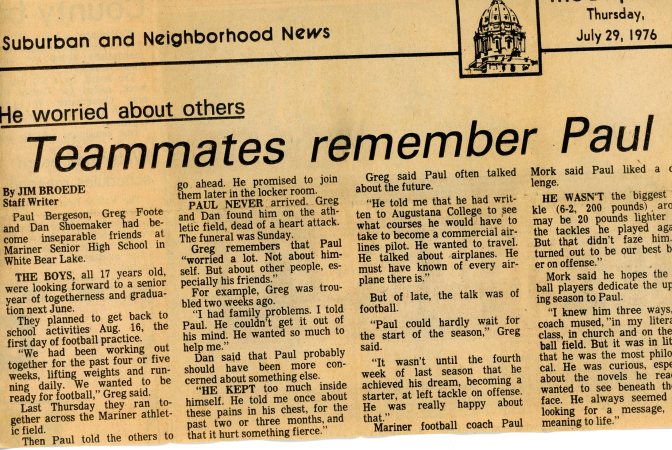 They also shared insights into Paul’s post-high school plans. I remember that he was interested in aviation and he told his friends that he was looking at Augustana College in Sioux Falls, South Dakota. I don’t think I ever had a conversation with him about that possibility, but I’ve since learned that for about 25 years, Augustana was the only small liberal arts college in the entire midwest that had a flight school and it was highly regarded in the industry.

Before my father passed on, he asked me to complete one task that he hadn’t managed to accomplish in the years since Paul’s death. He always intended to establish a memorial to honor Paul and never did it. He didn’t express any suggestions, but left it up to me to find an appropriate solution. I’m afraid that I haven’t had any easier time of it than he did and it’s taken me far too long to make something happen. However, this reminder that Paul might have attended Augustana College had he lived, struck a chord in my memory.

Our grandfather, Ragnvald Bergeson, graduated from Augustana in 1918 with a pre-engineering degree, just eight years after having arrived in the United States at the age of 16. If I arranged for a memorial gift to Augustana University (there was a name change a few years ago), it would fulfill my dad’s wish and make a generational connection that I find meaningful.

Starting in the spring of 2019 and continuing for five years, one Augustana student each year will receive the Paul Timothy Bergeson Memorial Scholarship. They must be a declared engineering major and preference will be given to a member of the football team. I think my dad would approve.

I retired in 2018 from a 30-year career at Carleton College. What do I do with my time you ask? I play my horn in several ensembles, I sail my boat (Querida), and I hang out with my family or my friends. What could be better? If any of my family members have questions about their lineage, please email them to me at bergeson@northfieldwifi.com. View all posts by Dan Bergeson